Rohan Tripathi is the Founder Director at Inovocare Healthsoft Solutions Pvt. Ltd (IHS), an upcoming MedTech start-up working on varied areas like Medicinal Adherence, Diagnostics and Medical Education. He is a BIRAC BIG19 Awardee, winner of IICDC by TI and DST (Govt. of India), a NIDHI PRAYAS Grant Awardee and former Incubatee at IIM B.

We start the profile by trying to decode the essence of the persona – the forces moulding his mantra of success. Rohan shares,

“I have been obsessed with entrepreneurship and tech innovation for over half a decade now. I also love learning from and interacting with budding student start-ups. As a mentor, I am proudly associated with Team Pragati Tech, a budding start-up incubated at IIT Palakkad who have been the winners of Tide 2.0 and TechBharat Hackathon among others.”

What is the one big idea, concept or philosophy that defines Rohan and his approach to life and success? We take the narrative deeper, and Rohan happily complies...

"Well, the success part I guess time will tell, but if there is one mantra that I believe in then it is simplicity. And I believe it helps us a lot in our decision-making process, in choosing both the problems to solve and in the manner in which to solve them. Also, I guess, it’s simply all about teamwork, and I am really fortunate to have an awesome and well-rounded team at IHS.”

We’re curious: Why or how did this philosophy become the driving force of the man’s life? Was there any person or life-altering experience or turning-point that caused it or inspired it? Rohan reflects before sharing…

“Growing up, I was fortunate to have a first-hand impression of the day-to-day activities of various institutions, including a textile business, a clinical research firm, and even a theatre group. All these experiences helped me gather some insight that came in very handy when I finally started up on my own.

During my final year in college, I closely interacted with a group of clinical pharmacologists from a reputed hospital in Kolkata. This included my mentor and guru Dr Shambo Samrat Samajdar, who has relentlessly supported and guided us since day zero.

These frequent interactions with the medical fraternity and patients, helped us identify the real existing problem, which was then supported by extensive field research, and thus our journey began.”

What lies ahead for this idea champion? What is the big goal or problem – if any – that Rohan and his team wants to solve in the future with the help of his life mantra? Rohan quenches our query promptly, his eloquent response laced with the glint of conviction…

“The aim is to build smart affordable medical devices that would further enhance the reach of digital healthcare with a special focus on the Indian elderly population. While smart solutions exist abundantly, achieving a product market fit in terms of users’ needs, price, infrastructure, etc, makes simplicity an essential factor in the idea-to-market process.

Our initial venture, MedpeRTM - your personal Medicinal helpeR, is a smart medicinal adherence kit, which ensures that all the medicines are taken on the scheduled time, and even keeps a complete record of the entire post-prescription, medicine consumption journey. The rapid rise in e-pharmacies and home care units, along with the ever-increasing numbers of the Indian elderly population, makes MedpeRTM even more essential.

Our second product, Non-Invasive Baro Reflex Assessment - Combined System or NIBRA-CS is a cloud-based IoT-enabled one-stop user-friendly solution for autonomic neuro-function testing, facilitating the diagnosis of autonomic neuropathy! We believe, that apart from the diagnosis, such a device would be influential in ethically developing an Indian database of Cardiac Autonomic Neuropathy.

We also have Inovocare e-Academy, a platform for continuous Academic and Public Awareness Discourse on Healthcare! IHS routinely brings to you CME programs and webinars with distinguished speakers from all over India.

What started as a plan to cope with the lockdown and other restrictions has now evolved into an active academic forum of over 400 doctors from all over the country. Our proud associations include the Indian Association of Leprologists, Clinical Pharmacologists of India, Indian Pharmacological Society West Bengal Chapter, Association of Physicians of India, West Bengal, and the East Bengal Club Kolkata among others.
All three of the ventures are aligned to enable the inevitable digitization of healthcare.

FEATHERS IN THE CAP

Led by oodles of vision and courage, it is no surprise that Rohan’s team has gone from strength to strength, scaling one peak after another. Here’s a quick glance of the wins, applause and accolades garnered so far…

•    Secured 2nd Position in the Diagnostics Category of the 19th call of Bio-Ignition Grant by BIRAC, Department of Biotechnology, Govt. of India.
•    Recipient of the NIDHI PRAYAS Grant by The Department of Science and Technology, Govt. of India.
•    Best Performing Start-up at The Big Pitch Competition Issued by BCC&i, Dec 2019.
•    Winner of India Innovation Challenge Design Contest 2017 issued by DST, Govt. of India & Texas Instruments, Aug 2018.
•    Incubated at IIM Bangalore formerly.

We prepare to wrap what has been a deeply edifying and inspiring session by wishing Rohan Tripathi the very best for the future, and requesting him to share a word of two about Voice of Healthcare. The leader who lets his ideas do the talking, generously obliges....

“We are really immensely grateful to VOH, for deeming us worthy of this platform. This helps us reach a wider audience with our solutions. This kind of recognition also encourages budding entrepreneurs and solution makers who have taken up this daunting yet exhilarating path.” 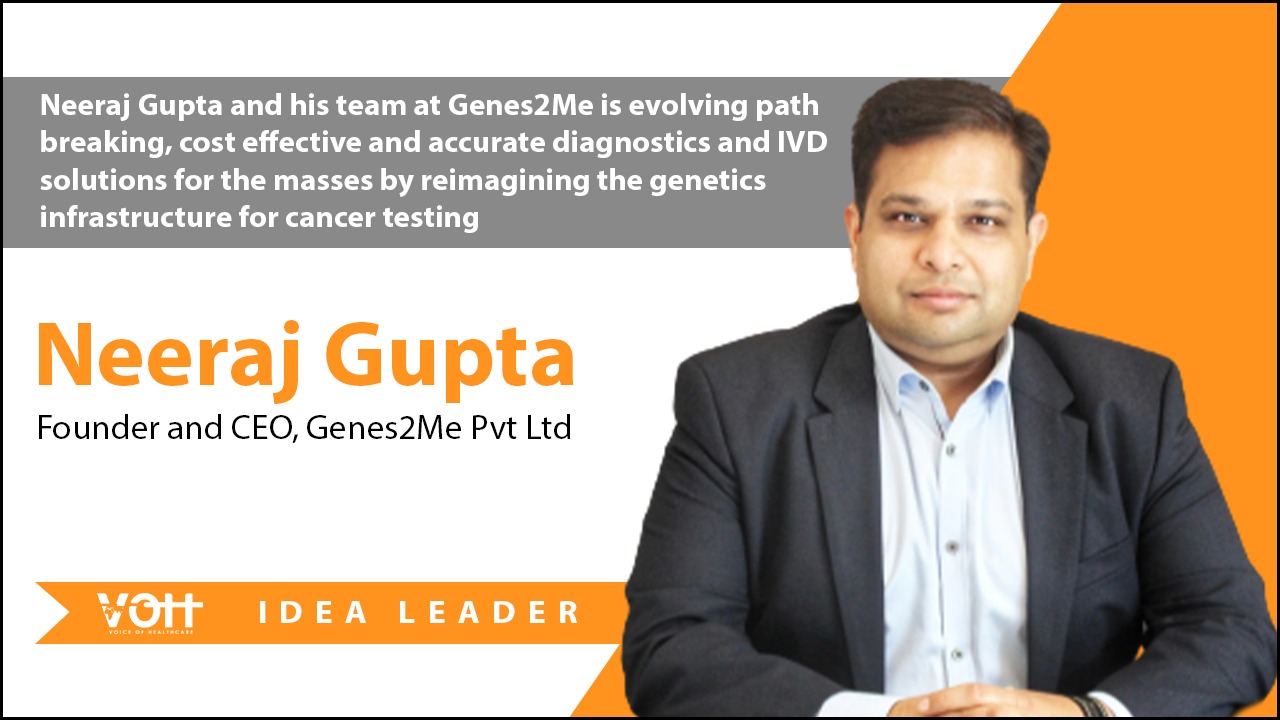