27 May 2021: Dr. Niraj Jha – CEO & Founder of Hanuman has a decade of exp in Health Care as a Leader with extensive experience in Hospital Operations, Quality Management, Business Development, handling P&L, Marketing of HCOs, Social Initiatives, Technology Roll Outs, and Clinical Data Management etc. He has worked with Glocal Healthcare as a Cluster head with experience in Hospital management consultancy and now ventured his own start up Hanuman in Patna, Bihar since 2020. Hanuman, is a start up in the health care service for the last mile delivery in Patna, Bihar. Dr. Niraj believes when you are determined to combat the situation and have a passion you will find ways to move ahead. 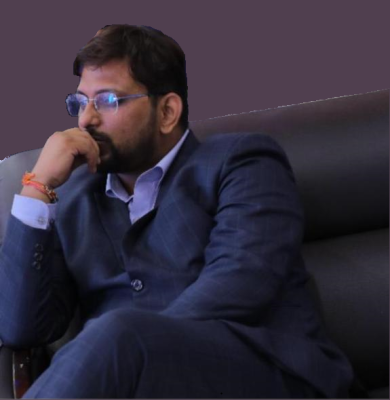 Dr. Neeraj, the founder of Hanuman Service, shared with us that from April 15, suddenly the calls started pouring in, so we braced ourselves and prepared our team to fight the battle informing all the holidays were over and God gave us this opportunity to serve and this time is difficult, it has to be handled with courage and strength.

All the members of the team were enthusiastic and determined to help, each query raised in the call center was immediately sent to the respective team. Co-founder Santosh Singh says that the biggest problem was due to oxygen and by 20 April leading to sheer depression and helplessness. Every call that came to us were weeping, cries and pleading for help.

With the increasing number of patients, there was lack of oxygen in the hospitals and thus vendor’s extracted oxygen from ambulance which adversely affected in an increased fare which invariably increased the price of the cylinder from 30k to 60k.

Last month during 2nd wave of Covid, large number of people were admitted to hospitals with huge scarcity of oxygen, medicines, hospital beds, ambulances and testing equipment surfaced which was witnessed by everyone. In such adversity and disappointment, bad news poured in from everywhere.

Meanwhile, many people showed their wisdom and courage and with the best possible effort, they continued as warrior to fight against the pandemic and simultaneously helped thousands of people.

Some made food for people by making bread bank, with plasma using many social media channels with informative share on WhatsApp group.

Hanuman is one of the organization who worked as Sanjeevni for people as the name suggest for the last one year. This Bihari start-up was established during Covid in 2020 serving Bihar, Mumbai and Jharkhand. Last month, when the aggression of Corona reached its peak, team Hanuman heard the plea for all help under the no refusal policy and with his limited strength, they were busy in fulfilling the needs of all.

Our services includes collecting test samples, ambulance services, Home ECG, Home Nursing and they spent all their resources while their employees, who were serving patients when their own families faught with corona.

Hanuman extended their service from providing oxygen to patients to hospitalization for Covid patients, providing medicine and food to the doorstep. Even when the family members failed to even touch dead bodies of their loved ones, our team indulged in cremating the dead bodies and arrange rare and unmarketable medicines. Team Hanuman has served more than 3000 people to provide medical advice.

In general, there was nothing like a customer and service provider. People could not understand where to go, which hospital to find beds and oxygen, oxygen cylinders were emptied from the ambulance and the priority for oxygen vendors was to deliver oxygen to the hospitals. There was a huge increase in the price of oxygen cylinders from 30k to 60k.

In such a situation, the fare of the ambulance with oxygen increased 10 to 20 times than the normal rates. The private ambulance driver were not vaccinate in the health worker category because of which people were also very scared. Due to this deepening problem of oxygen, a large number of ambulances were closed and only the bodies were acting like vehicles.

Dr. Neeraj consulted his colleagues and sought help from the people to fight it. Karekeba Ventures and Mithila Angel Network joined and crowd funded with the help of Sapna Foundation. 40 cylinders were purchased from the money collected and are distributed for FREE among the ambulance drivers associated with Hanuman Services. Due to the increased price of oxygen, it was impossible to run an ambulance at the ambulance rates fixed by the government were not suitable to operate. In Delhi, the government has fixed a rate of 100 rupees per kilometer.

Normally, the cost of oxygen in hospitals is 100-200 rupees per hour. That is, 1.5 - 3.5 rupees per minute. The price of oil is Rs.10 per kilometer along with the maintenance costs of the driver the cost of washing the vehicle together, it will be understood that in determining the ambulance rates, the government did not bother to do any math and issued a decree to gain popularity.

Hanuman received several request from their customers and thus started evaluating the data of more than 40 hospitals, verifying the facilities and the list of doctors. After finding out that the beds are emptied in the hospital of the appropriate system, our team verified all the information in this way, hundreds of patient’s lives could be saved just by ensuring they reach the hospital on time.

Ambulance operators and drivers are also very happy with Hanuman Services and appreciate them very much. Manojji (ambulance operator) of Rajender Nagar says that getting oxygen cylinders for free was a dream. Where people were getting a cylinder for 70 thousand, there was no imagination to seek it for free from Hanuman. We will also charge a reasonable price from the patient.

Ambulance operator of Pataliputra Ajitji was not convinced when we asked him to come and collect a free 40 litre cylinder he thought it’s a prank call after calling for consistently for 2 days he came and was delighted to find that our support will help him serve more patients.

Those who are not connected with Hanuman also requested for additional services and we ensured to serve every single call. We are glad we could support the ambulances by crowd funding.